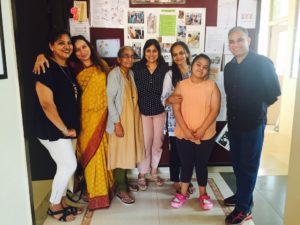 The feet were buoyant , the hearts soaring… walking down the slope of the familiar surroundings this time was a totally different high. The wait of three long years was finally over… how would it be meeting the people we so looked up to… the nurturers, the same people who took a raw, stubborn, boisterous little Anoushka, all of 5 years in their tender hands, welcomed her with all their love and 5 years later handed over a much more confident , a mature Anoushka into our hands for her onward journey , to another world.. as we relocated to Dubai in 2014. All this ,to give a bit more exposure to her to enhance her personality . 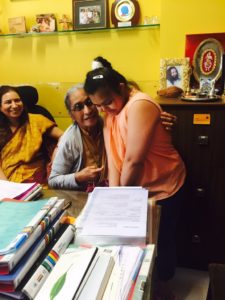 Today was a test of those three wonderful years she had spent away from them… her family in SPJ Sadhana, Mumbai. Today they would judge and tell us if we had justified the move for her. Today she would recreate a place in their hearts though there was always a small corner for her in their large hearts. We as parents were confident of the feedback but what we received in those 2 hours there was unimaginable… an out of the world experience. Every moment spent there, every word spoken by the people we revered, will remain etched in our hearts forever. The feeling overwhelmed us and I couldn’t stop tears welling up. It’s alright to be a little weak at times.. not necessary to put up a brave front always. We are human after all. 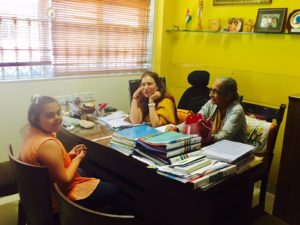 From the word go , it was a feeling that words will fall short of. The most humble and humane Sr Gaitonde and the benevolent Dr Radhikey Khanna were gracious enough to take out time from their busy schedule to meet us. It was our privilege and honour to spend time in their company. The kind of affection and undivided attention showered on Anoushka was ineffable . The interaction was something I could not capture in my camera but it will run like a movie in my mind for the rest of my life. They were so very proud to see that Anoushka had turned out to be a beautiful person, all grown up, mature, more interactive. One thing that had not changed was her attitude which remains a constant with her. But then it’s this attitude that sets her apart from the ordinary .The look of adulation in their eyes, the enthusiasm in their tones, the warm hugs…those were the  moments we had waited for…a sense of achievement engulfed me. We knew just then we had been fair in moving Anoushka to a new destination. We as parents had achieved what had been expected of us. She had matched up to their expectations of her infact exceeded them. 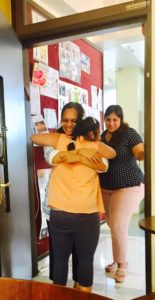 Another moment we had waited for was ,Anoushka’s reunion with her mentor & guide, Fionika. Fionika has played an important role in her life right from the day she stepped into the premises of SPJ. It was a moment of ultimate happiness to see Anoushka run straight into Fionika’s arms and huddle her close and tight. Can these moments be ever forgotten?It was worth waiting for three long years and travelling across oceans to capture this everlasting moment.

“In a world full of temporary things
you are a perpetual feeling.” Words of Sanober Khan justify this meeting. Yes, these are the people who will remain a constant in her journey of life. They are the ones whose fingers she will need to hold on to, if not literally, atleast in spirit. They are her anchors of life. Thanks to Fionika & Tejal, we got to do a detour of the school as well. Surprises in abundance awaited her. She was yet to meet her BFF, Sanjana and a few loving faces she had left behind but never forgotten. The time spent in the same classroom proved me right. It was like a dream sequence to see Anoushka being showered with the inordinate love by the faculty of SPJ. They all came down to meet her, Saloni,the teacher who enhanced her skills in computers, the volunteer Rashmi Aunty who always held that special corner in her heart for the duo, Anoushka & Sanjana, and always had a chocolate in her kitty for them to give them secretly, Charu aunty, the ever smiling face. Lots of loving & beaming faces surrounded her, some familiar, some not so but exuberating the unfailing love & affection. What did they expect in return? Just a smile…. the sweet innocent smile of Anoushka. Expressions always don’t need words. Silence speaks a million words. The feelings were mutual. The connect was instant. The clock ticked back to March 2013.Everything stood still…literally. We just stood away & soaked it all in.These are some precious moments which have made their way into our memoir of life.

“Some memories are realities and are better than anything that can ever happen to one again.” Willa Cather Some of her favorite things